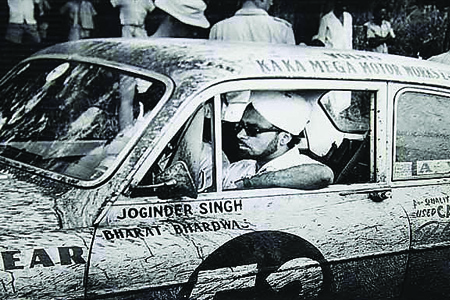 When we come across the words ‘Flying Sikh’ the first name that conjures up in one’s mind is the great runner Milkha Singh. A movie has been made and countless stories recalled about the Flying Sikh. But actually there are 3 more of them – Karamvir Singh - the Malaysian car rally driver, Satwant Singh - Zambian Sikh who was 14 times winner at Zambia International Rally and there is one more. And he is the most popular Flying Sikh in the world.

Born in 1932, Joginder Singh Bhachu grew up amidst the tea plantations in Kericho, Kenya. His father who had come to Kenya in the 1920’s for work came from a small village called Kandola (27 kms. from Jalandhar city, India) was a big inspiration for him and his brothers because of his hard-work, sincerity and determination.

Joginder did his initial schooling at the Indian High School in Kericho and later finished from a boarding school in the capital city of Nairobi. He always had an interest in cars and by the time he was 13, he had learnt how to drive his father’s Chevrolet.

One thing that always attracted him was his father’s driving. His father drove fast, very fast. Sitting besides his father he would see how his father raced past traffic to reach any destination. That feeling of speed got in to him. Soon after he joined his father’s auto repairing workshop learning and mastering the techniques as a mechanic. His attraction towards car racing prompted him to join the Kenya AA (then known as the Royal East African Automobile Association) as a guide.

By the time he was 26, his interest to modify and drive cars gets him more involved. He begins by participating as a co-driver in his first race on a Morris Minor along with a friend called Raman Patel in 1958. Then with support from the Cooper Motor Corporation, distributors for Volkswagen (a firm that still exists today) Joginder and Jaswant his younger brother participate in rallies on a Beetle.