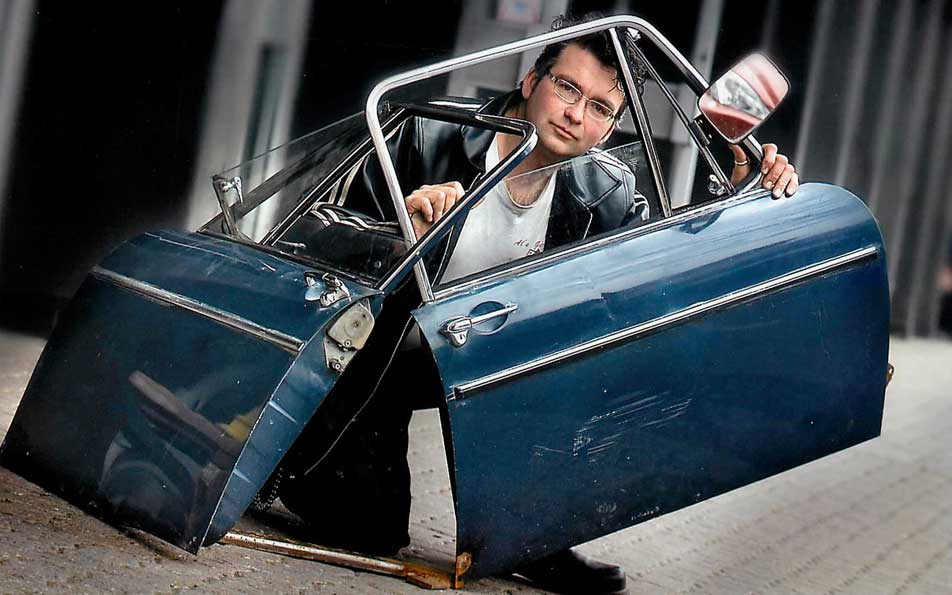 Ask any artist friend of yours who is into sculptures and figures, the one name that will certainly crop up during any discussion is that of Henry Moore. If Picasso enamored us with his cubism, Henry Moore influenced all the artists of the 20th century with his abstract forms that bordered on biomorphic (a type of design that is suggestive of a living organism) forms.

If Erwin Wurm created some of the world’s ‘most unique’ automobile art (read our blog - AUTOMOBILE ART) in the 21st century, can we label this person as the man who created the ‘most abstract’ form of automobiles. Can we label him as the Henry Moore of automobiles?

Andy Saunders started modifying cars right from the age of 15 when he along with his father transformed their Ford Escort Mark I and beat 300 other cars in an art competition. It was called BIRD PULLER.

At school too, Andy was more busy drawing sketches of cars rather than focussing on maths and science that made the teachers also complain.

In the last 40 years, he has created some of the most fascinating creations out of a car. Abstract, weird and yet desirable. Some of them are,
TETANUS
It was a 1937 CORD 812 Westchester Sedan that was sold first to the Earl of Derby. After that it changed hands and little is known about this car as it was dumped in one of the playgrounds where it began to sink in to the ground. Children used the roof as a trampoline to jump on it and it weathered.

Few years later this car appeared in an auction but there were no buyers for almost 20 years, until Andy Saunders saw it. He decided to work on it but not before making the statement “I am not touching that without having a Tetanus”. After all he knew he was working on something that was just dumped in the ground and he had to work hard on it and we all know why we take Tetanus injections.

The car was launched this year in August to a rousing reception.

CLAUSTRO PHOBIA
It was always Saunders dream to enter in to the Guiness Book of World Records and this was one opportunity he couldn’t miss. So he takes a car and configures it give a height of just 34.5 inches. Today this creation sits in Tokyo, Japan.

It is another matter that he was not satisfied and he made another creation that had a height of just 21-1/4 inches.

It is not that he creates them all on his own. He is also invited by the automobile companies to design unique things that can convey a message to the masses.

Some projects that he was commissioned for are,
PROJECT NISSAN SKIP
For a Nissan sponsored project that was aimed at Nissan Leaf’s low emission car, Andy Saunders created this display using 3 cars. It was displayed in London in July’2013.

PROJECT HYUNDAI UNHINGED
This was a unique project that Saunders did where he had to convey a message that every i30 came with a standard IPOD. To do this Saunders cut an i30 in to two pieces and joined them with a solid hinge and when it slid open exposed the plush interior along with the IPOD.

PROJECT HONDA ZOOMER
This project had Saunders using two parts of the cars of models Daewoo Matiz (also made in India) and the Saab 99.

So, can we label Andy Saunders as the Henry Moore of automobiles?

* all images credited to Andy Saunders