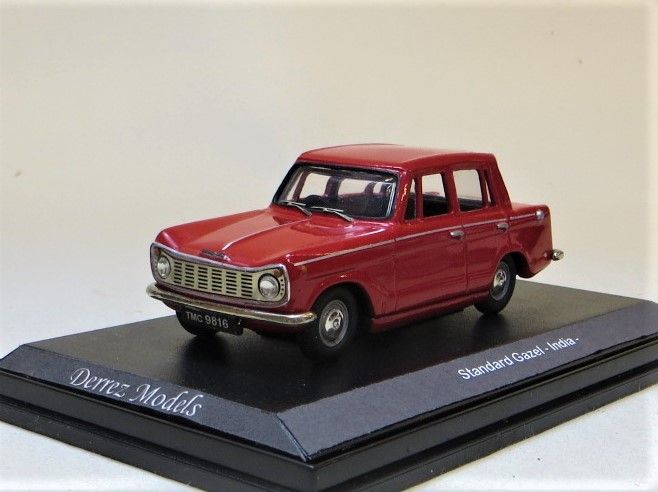 Produced by the Standard Motor Products of India (STAMPRO) based in Madras (now Chennai), the Gazel was the result of some crudely done indigenisation in the seventies. The year was 1971.

Based on the Triumph Herald (also made by STAMPRO) having the same 950cc 4-cylinder engine, the new offering was new in several ways. Designed by one Nasir Hussein, this new car had 4-doors (unlike the Standard Herald that had two), one single bench seat doing away with two-bucket seats, newly designed rear suspensions, anti-roll bar, etc. Poorly finished parts made by local Indian manufacturers were used to complete the car.

Promoted as ‘The Small Big Car’ the name Gazel was an improvisation of the word gazelle (locally known as the Chinkara, a type of antelope also found in Iran, Afghanistan and Pakistan).

The model didn’t fare well as compared to her counterparts and so production of the Gazel finally ceased in 1974.

This scale model in resin has been completely hand-built by world famous master model maker from Netherlands. Max Derrez is the only producer of Indian made Standard Gazel replica’s in the world. Now old (as he says, which we don't believe) and retired, he is at ease in the comforts of his home. He loves our Facebook page and also likes what we are doing in India for model collectors.

A rare find, now made available in India for the very first time.

Fully hand-built*, hand-wrapped and hand-packed, this model is in resin (not ZAMAC) with limited number of pieces produced several years back. A rare find, this is being made available in India for the first time.

* since each of these are handmade individually, do not expect this model to be finely finished as factory-produced models.