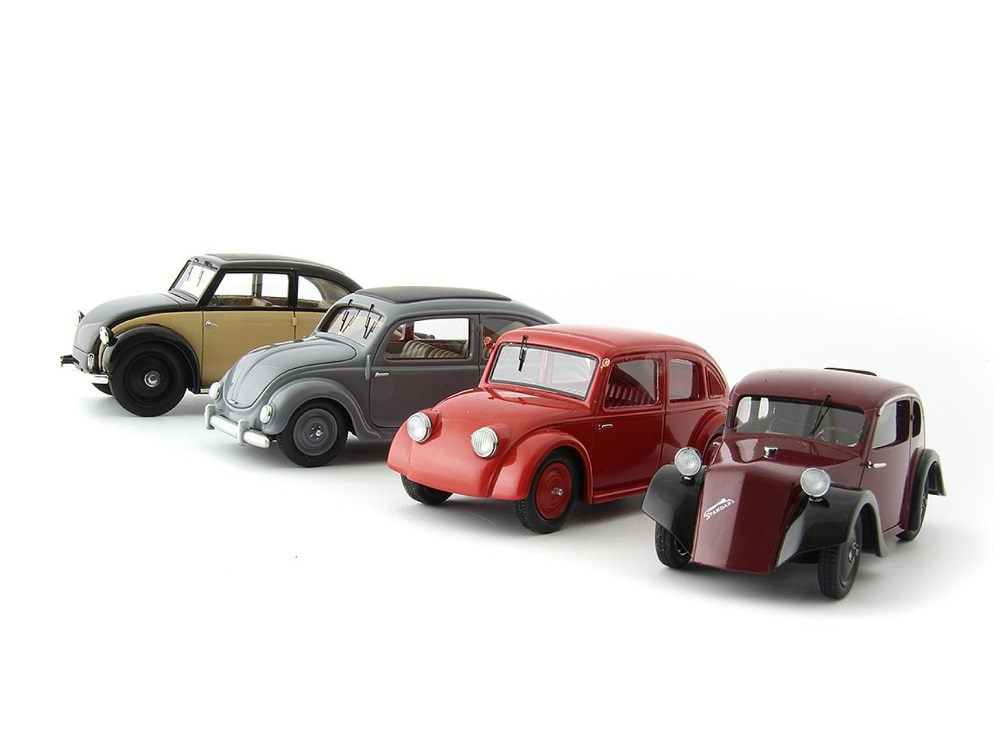 Though Dr. Ferdinand Porsche is widely considered as the person who brought the concept of a Volks (people's) Wagen (car) through his Volkswagen Beetle, in reality this story is incorrect.

There were others from different countries who made attempts to produce one, a decade earlier. Several "Volks" "wagen" models rolled out in 1931 while the VW Beetle came out much later (1938). Names such as Béla Barényi^, Hans Ledwinka, Paul Jaray and Josef Ganz whose running models were produced, were all consigned to history either due to politics and/or personal preferences.

Those earlier working models have now emerged through this Set of 4 super exclusive collectibles known as "Evolution of Volks Wagen".

Mercedes-Benz W17 Streamline
In the beginning of the 1930s, when the race to make a small car was on, Daimler Benz created a model called the W17, in 1931. Working on a sketch earlier provided by Béla Barényi, the model was developed by two Mercedes engineers Dr. Hans Nibel and Max Wagner with inputs from the brilliant Josef Ganz (an engineer who offered technical inputs through his external consultancy services).

This Mercedes 120 (H) model had a rear-mounted 1.2 litre horizontally opposed 4-cylinder engine with 2-doors. A total of 10 cars were produced before Mercedes opted for the larger sized 130H as production model after 1934.

NSU Type 32
After Dr. Ferdinand Porsche's tryst with motorcycle maker Zündapp to make a Volks wagen through a model called Type 12 having a 1.2 litre 5-cylinder engine failed miserably during trials, he was next approached by another motorcycle producer, NSU.

Dr. Porsche's firm produced a model called Type 32 with a more powerful 1.5 litre engine. Porsche also got the chance to use his newly developed independent suspension system (this suspension had failed in Type 12).

After doing initial tests with 3 prototypes in the Black Forest region, this steel-bodied car failed to impress NSU's Managing Director Fritz von Falkenhayn who felt that the car made more sound than a road-roller and so abandoned his plans to make a 'people's car".

Tatra V570
Designed by Tatra’s Chief Engineer Hans Ledwinka’s son Erich Ledwinka and designer Paul Jaray, the Tatra V570 was an attempt by Tatra to make a “people’s car” or Volks wagen for the people of Czechoslovakia.

This was also in 1931, when the team thought that having an engine at the rear would be beneficial for a small car. It would mean more space for luggage in the front, lesser noise and vibration. With no drive shaft for a rear-engined car, would also mean that the floor of the car would be flat. And so, two models were prepared with a 850 cc engine having a power output of 18 hp. For some reason, the model was not put into regular production (but design elements of it’s tear drop design was used to make the later model, Tatra T77).

Standard Superior
In 1931, Wilhelm Gutbrod of Standard Motorcycles wanted to diversify into production of cars and so approached external consultant, Josef Ganz. Ganz who by this time had designed a prototype called the Maikäfer for another motorcycle maker Adler, decided to offer this car model to Gutbrod after few design changes.

With a mid-mounted horizontal engine, this new car car with a wooden body was presented to the public in 1932. Known as Standard Superior, this car a year later with a longer chassis was labelled as the “lesser priced Volks wagen”.

^ Béla Barényi's initial sketch of a Volks wagen in 1925 was more than a decade older than Dr. Ferdinand Porche's, VW Beetle. Barényi's advanced ideas of safety standards such as collapsible steering, crumple zones, etc. in cars were implemented as industry standards 25 years later by automobile firms.