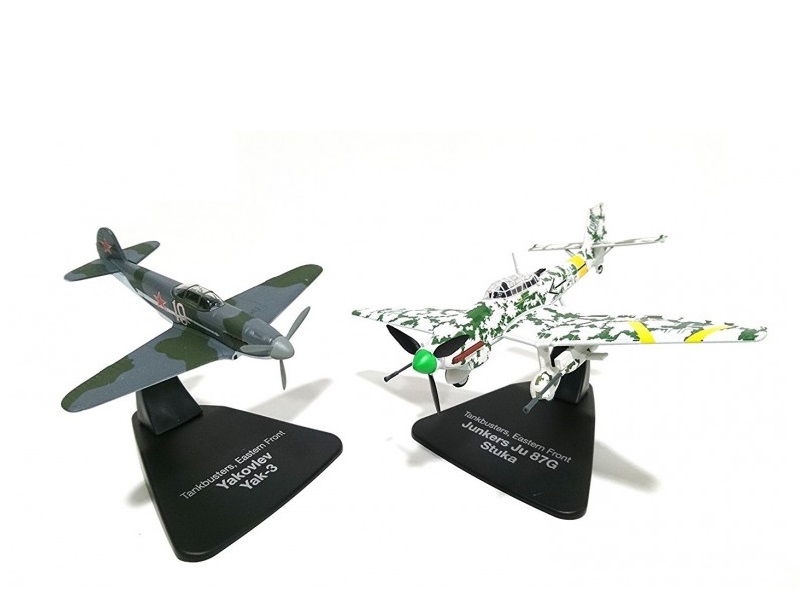 During World War II, the Eastern Front theatre of conflict arose when the Axis Powers namely Italy, Germany and Japan (also known as RoBerTo since agreements were signed between Rome, Berlin and Tokyo) fought against the Soviet Union.

Also known as the Great Patriotic War (in Soviet Union), the war began on 22nd June, 1941 when the Axis Powers crossed in to the Soviet Union. Following the Battle of Berlin, the German forces surrendered to the Red Army after which the conflict ended on 9th May, 1945.

It was during this period that the German Luftwaffe (German Air Force) with their Junkers Jaircraft battled it out with the Soviet made Yakovlev’s.

Junkers Ju 87
Nicknamed Stuka (derived from the word Sturzkampfflugzeug or dive-bomber in English) was designed by Hermann Pohlmann and first flew in 1935. The Junkers Ju 87 was already well-known and helped in Hitler’s conquest to take over Netherlands, Belgium, France, etc. But being a dive bomber (a type of aircraft that actually dives and locks on to the target) was vulnerable to the firing from other jet aircraft. Also since the Soviet made tanks were playing havoc with German ground forces, it forced the Luftwaffe to deploy them as effective anti-tank planes.

Yak-3
The Yakovlev made Yak-3 was in the World War II the smallest and the lightest fighter aircraft. It's high power-to-weight ratio gave excellent performance. So deft were these aircraft that on the Eastern Front on 16th June, 1944 they brought down over 15 German fighter planes while losing just one aircraft.