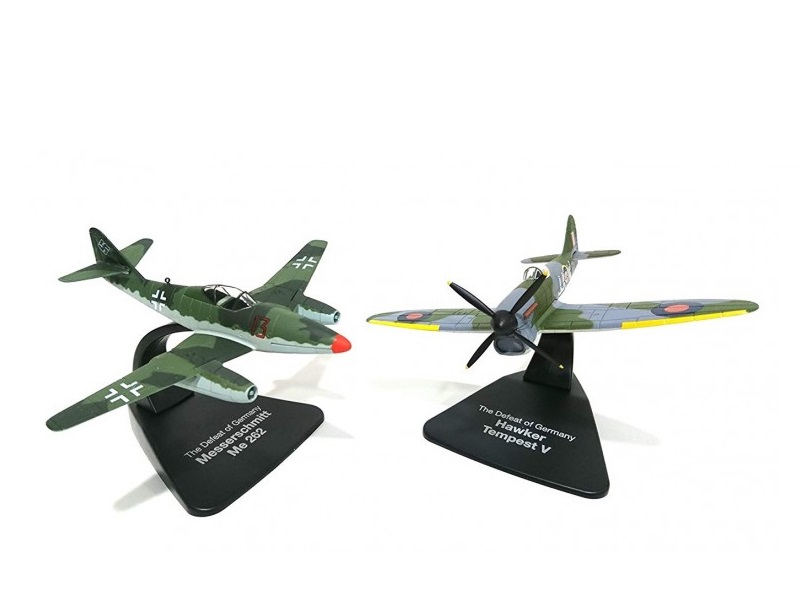 In its aim to defend Germany, the Luftwaffe (German Air Force) took the battle to the shores of Great Britain by launching V1 – Flying Bombs (a type of cruise missile that was intended to cause maximum harm to the civilian population and flatter industrial establishments). War on the skies was fought day and night.

Though duels between the German made Focke-Wulf Fw 190 and the American made Mustang P-51D on the German front are legendary there were two aircraft that participated in air battles elsewhere - Messerschmitt Me 262A and Hawker Tempest.

Messerschmitt Me 262A
The ground attack bomber Messerschmitt Me 262A first flew on 18th April 1941. Designed on the orders of Hitler, the Me 262A though was the first jet-fighter of her time, but was bogged down due to higher maintenance costs and operational costs. But it did prove its mettle during attempts to bombard cities in Great Britain with her armament of V1 Flying Bombs.

Hawker Tempest V
The RAF (Royal Air Force) already had a successful aircraft in the Typhoon but its performance at higher altitudes was poor. So the Hawker Aircraft Company re-designed its wings and cockpit and naming it as the Typhoon II. It was later renamed as the Tempest.

The Tempest was used as a low-level interceptor primarily against the powerful  Messerschmitt Me 262A bombers. They were also used to do carpet bombing inside Germany. It is said that in air-to-air combats, the Tempest planes achieved an estimated success ratio of 7:1.

A highly respected aircraft, these were also used by the Indian Air Force (IAF).