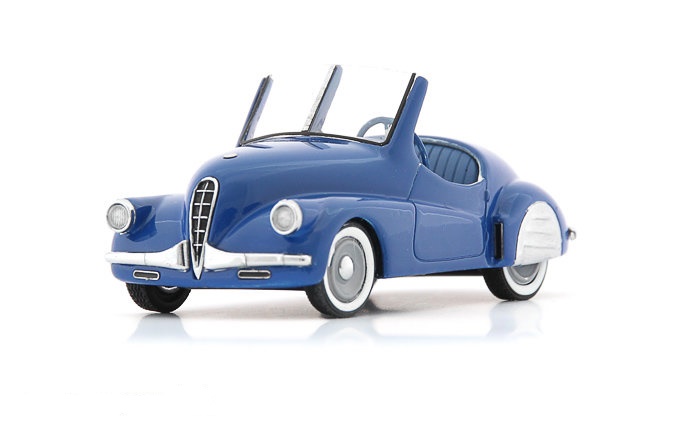 On March 30, 1947 the Milan company "ALCA" (Anonima Lombarde Cabotaggio Aereo) presented the Alca Volpe for the first time in Rome by Erminio Macario, a well-known and popular Italian comedian at that time.

ALCA manufactured the cars in Trient, but only made them in quantities of 6 at a time. The Volpe delighted so many customers that they paid in advance to ensure that production would start for the small roadster. Therefore, the company earned more than 300 million lira (around 6 million Euros at the present time). However the money never flowed into production as the responsible persons disappeared with all the money. This of course caused ALCA to fall into bankruptcy, and the company was liquidated.

Amid this scandal, six of these microcars actually made it to the production line, but only a few of the original six models survived.

This is a RESIN model that is part of the 1 of 333 pieces made. Extremely detailed, this microcar model will carry value in the coming years.